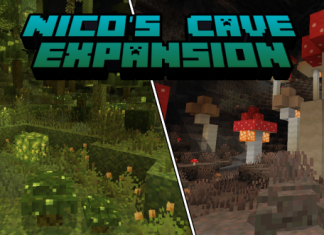 Are you a fan of Avatar: The Last Airbender? If you are, this addon is ideal for you! This mod includes four element benders: Water 🌊 Earth🌱 Fire 🔥 Air 💨, as well as new weaponry! I hope you like this mod!
Because all weapons and entities are unique, they do not replace anything in the game.

Flying bisons are animals that may be generated and tamed; you can even ride one to soar and receive no harm from falling! Tame them by continuously mounting them (as if they were horses), and you may give them apples, golden apples, hay bales, wheat, or magical apples to tame and heal them. They have 150 HP and will flee if a crowd or a player attacks them. They may also be outfitted with chests, allowing you to take stuff with you.

Firebenders are strong monsters that can blast fast-moving fireballs. They have 20 health and may be found in mesa biomes and variations.

It shoots fireballs that creates fire upon contact and causes a tiny explosion.

After throwing the projectile, it will explode and cause fire in the radius of 3 blocks after 3 seconds of countdown. Use this ability to set up traps!

Creates a blade of flame for melee attacks. It is stronger than netherite, as durable as diamond, and grants Haste 1 and Fire Resistance.

The most uncommon, strong, and hazardous kind of Firebending. It emits a white beam that causes a tremendous explosion in a radius of 7 blocks. Combustion bending scrolls, which are dropped by combustion man, are required to build the ability.

Waterbenders, the polar opposite of firebenders, may throw ice tridents at you! They have 30 health and may be found in ice biomes and variations.

Waterbenders, the polar opposite of firebenders, may throw ice tridents at you! They have 30 health and may be found in ice biomes and variations. They drop airbending which can be crafted into airbending staff.

It can also be changed into AIR GLIDERS. (Retextured elytra) To obtain just put your air staff in your crafting section to turn them into gliders, and vice versa.

They spawn in plains biomes and can cause ground explosions (Fireless) or strike directly. They have 45 health.

Creates a fireless explosion. They shoot stone and explode on contact.

Summons an earth boulder in front of you to protect from ranged attacks. Cooldown: 3 sec

A passive ability which gives you slowness, but also gives you absorbtion, resistance, and deals 7 damage.

When you have this skill, you can demolish nearby blocks while holding them. Can even smash bedrock!

Spawns in the underworld and may be tamed with either raw or cooked flesh. When transported to the overworld, it transforms into zoglin.

P.S: If you want to make a showcase/review, thanks! Please credit me in the description and put a link to this MCPEDL page!

If there is any bugs, glitches, or feedback, please let me know on my channel or down in the comment section!

Updated the download links , so now you can download the previous version (the one without sky bisons)

This Avatar: The Last Airbender‘s Element Benders Addon no longer makes use of Ma-J games addon code. In this version, I wrote the code myself and used vanilla packs, so it may appear similar, but it is not “ripping off” his simply because it came from the same open-source folders provided by Minecraft for free, so everyone should be free to use that (at least, that is my opinion, as his bison is similar to a vanilla donkey), and my addon has different behaviors than his. This is not to criticise the previously stated creator, but only to clarify, and the flight mechanism is not the same as his.