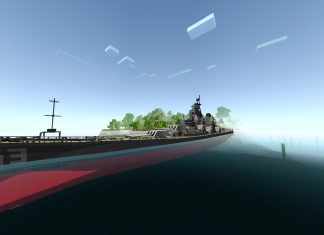 Assian Power - November 23, 2022 2
USS Missouri from 1990 with modern weapons sounds taken from Modern Warships game, Thanks to CreatorCrafter321 for helping me model Mark12, Borfor40mm and connect...

An ultra realistic shader for Minecraft Pe – Shaderless Shader will change the looks of the Minecraft game in a natural way. A shader but without shaders and not as a regular texture pack! This pack active on both mobile and window, work well on 100% of devices, and is only 5MB in size

Depending on the depth and blocks nearby, watercolor will changes

Bluer skies and clouds with varying transparency to provide variety in the skies!

Tropical and lush oceans and shores

An RTX Version is available now! There are a few normal maps or any form of PBR is available in this build. However, there will be a future build of the Shaderless Shader with RTX that will include it.

Some screenshots are taken with an RTC Capable GPU with Ray Tracing enabled. It’s not the main shader or Lite version

👉 If you like this shader, you can also check our MultiPixel Texture Pack [32×32], Tacky 3D Texture Pack