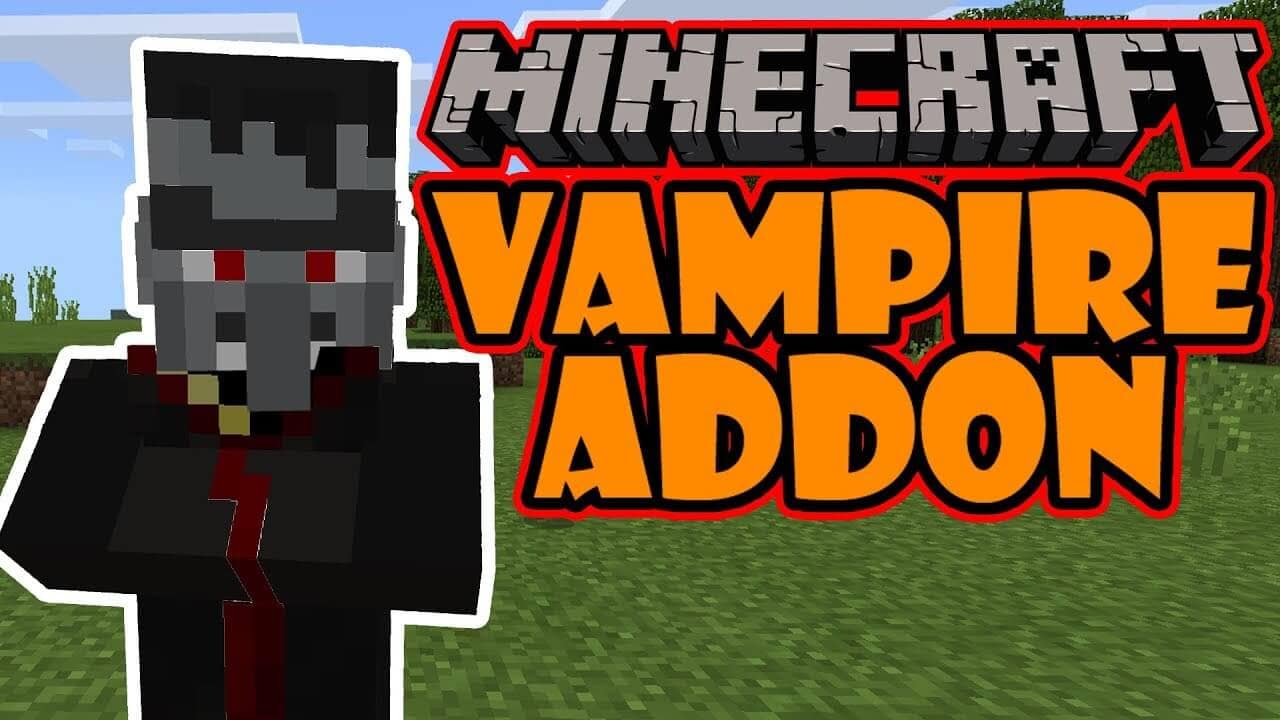 You are looking for a Vampire or Werewolf? And now they have appeared in Minecraft: Bedrock Edition. Vampire Addon adds 3 new entities and15 new items.

To start your journey, you need a new weapon, and Stake is what you need!

You need 1 iron ingot and 1 stick. Place it in your crafting table and you will get a Stake

In Creative mode, you can spawn Vampire with its own Spawn egg, and Vampire can be found roaming around in the night. Vampire has 2 variants.

Vampire attacks all Villager types, including Players be careful!

Sometimes, he can spawn as a baby, which is even more dangerous.

In order to cleanse the tooth from giving you a Poison Effect, you must drain the Poisonous blood into a Bucket!

You need your initial weapon to sharpen the Vampire Tooth into a cutting edge weapon! Although this takes away your Stake for a weapon that does less damage, you’ll need this new weapon for the next set of Crafting Recipes

This is a small step up to building your ultimate weapon, the Vampire BroadSword. You can place the materials anywhere in the crafting table and still craft the weapons and items

Dracula is a new Boss for the game! 2 main ways to spawn

Dracula’s Great Sword is the ultimate weapon used by Dracula himself. As shown in the image above, this sword is glazed in the blood of the Vampires

If you crafted this before the Ultimate Sword, unfortunately you’ll have to craft a new Vampire GreatSword.

The Bucket o’Purified Blood requires 4 Hearts of Dracula, 3 Gold and 1 Diamond Block. This new item can will be craft the final, and ultimate GreatSword

Congratulations, you have crafted the Vampire Killer’s Sword. This sword has a couple of abilities and also has an Enchantment Effect.

When lightning strikes Dracula, he will transform into this WEREWOLF!

You can spawn him via Spawn Egg alongside the other 2 previous mob eggs.

You can craft Elytra with 6 wolf Skin, 2 Vampire Tooth Blades and a Diamond Chestplate. It has custom skin in the inventory.

Much bigger, much stronger than the ordinary player, and much faster! Burn in daylight and spawn naturally in the night time or in really dark areas.

New food is quite expensive. The meat gives you a handful of great abilities, and it’s quite tasty!

This eye itself isn’t so nutritious. However surrounding the eye with glass will allow you to craft a new block which can be used for the crafting of a new weapon!

You need plenty of Diamond and Bucket o’Blood for these Blood Diamonds.

Just like a regular Jewel type material, the Blood Diamond can be crafted into a Block.

You can also craft the Blood Diamonds back in-case you don;t want the Block anymore! (3blocks craft 9 diamonds)

Plated Wolf Skin is a hardened, stronger version of the Wolf Skin. It is very expensive.

You will require 2 Plated Wolf Skin, 4 Blood Diamonds and the Glassed Eye to craft the Blood Diamond Hilt. Expensive, but worry not, for this is 2nd to the final step for the crafting of the sword.

This is the final version for the Dracula GreatSword, which is now called the Blood Diamond Sword.

Alucard now drops his own shield upon death! You can still craft it as usual, the shield only has a custom Texture update.