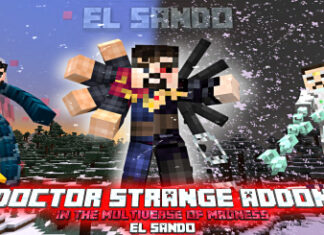 Minecraft Doctor Strange Addon – In The Multiverse Of Madness –...

HunGo - May 18, 2022 0
"We have very little understanding of the Multiverse." Check out the new Minecraft Doctor Strange Addon sneak peek in EL SANDO's Multiverse of Madness,...

Have you ever wished for a Minecraft version of Skyrim? So, there you have it!

v2 Dragonborn Addon is an addon for the game that includes yells, dragons, daedric lairs, dremora, and dragon lairs. Both bows and swords are included in two armor sets.

The structures come first. They’re all extremely rare, with ten dragon lairs and a daedric lair among them.

The daedric lair is a dungeon that can be found almost everywhere in the overworld. They have spawners that spawn Dremora and hold precious goodies.

Dremora are formidable warriors with 75 hp and quick agility. They could taunt you by saying things that make you feel bad. They are armed with daedric swords (powerful swords that cause close up knockback to nearby enemies when hit). They’ll drop daedric hearts, which are used in the creation of the sword, bow, and armor.

These are little patches of land with shout walls, which hold the yells in v2 Dragonborn Addon. They also include chests containing valuable loot, but they are guarded by vicious dragons. When you go too close to a dragon, it will soar into the air and transform into a three-phase miniboss. It contains the flying phase, which has 600 health and blasts a steady barrage of fire breath. The swooping phase entails swooping down to the earth and attacking you at a breakneck speed while maintaining 700 health. And then there’s the ground phase, where it falls to the ground and shoots you with fire breath and bites you if you get too close, with 800 health. After overcoming the third phase, the dragon will drop dragon bones, which are utilized to make the armor, sword, and bow.

The dragon is poised to strike:

In its flight phase, the dragon looks like this:

The ground phase of the dragon is as follows:

The chest’s potent items include:

This is how the shout core is made:

And here’s how the shout reader is made:

The dragon priest mask is a critical item to have later in the game:

This is required for access to Sovngarde’s portal. It will be employed by forming an end portal out of cobblestones and throwing the mask into the middle. Unknown blocks will be added to the site.

A dragon priest named Krosis will spawn above the gateway once it is opened. He has 1000 health, fireballs at you on a frequent basis, summons frost atronaches to attack you, and has a meteor shower attack.

He drops a daedric sword, 10 shout cores, and a dragon bone chestplate if you defeat him.

Aside from that, the portal to Sovngarde houses Aslduin, the world eater. When you first walk in, you’ll notice a strange-looking dragon. As you get closer, he’ll become more hostile. He possesses 2000 HP, a bite attack, a meteor shower attack, lightning-causing fire breath, and will try to knock you off of Sovngarde.
Sovngarde is currently fairly small.

The next item on the table is shouts. The shout reader and shout walls are used to obtain them. There are a total of ten. summon durnehviir, unyielding force, clear skies, storm call, fire breath, frost breath, elemental fury, dragonrend, and marked for death are some of the abilities available. They all have unique skills, such as summoning Durnehviir, a dragon who will fight creatures for you. As a boost, the whirlwind sprint will propel you onward. Unrelenting force summons a powerful shout that knocks your opponents back a long way. Any weather will clear the sky, but clear skies will clear all skies. A thunderstorm will be summoned using storm call. Frost breath creates an ice path, which freezes foes and causes frostbite. Flaming breath burns foes, leaves a fire trail, and causes nearby enemies to wither. Elemental fury will increase your speed and agility while also increasing your strength. Any flying dragons can be forced to land into their ground phase by using Dragonrend. Marked For Death also causes foes to suffer from severe debuffs, making them incredibly simple to kill.

NOTE: Many of the shouts’ powers have no effect on players.

Following that come the armors and swords. When the daedric sword strikes an opponent, it possesses a unique function that knocks them away. The dragon bone sword is unremarkable, but it does more damage. The daedric armor is a powerful armor made from daedric hearts, whereas the dragon bone armor is even more powerful but takes longer to make.

V2: This needed to be updated for 1.18, although there were a few additions and modifications.

To begin with, dragon motions have been improved, and the dragon bone sword now has a special fire ability. Magic scrolls are the biggest addition, and there are three strange ones you may make with a magic scroll like this:

Dragons have been nerfed and loot has been upgraded.

Other addons Minecraft PE are similar v2 Dragonborn Addon you can check in Mcpeaddons.com:

Morph Plus Add-on V3 for MCPE