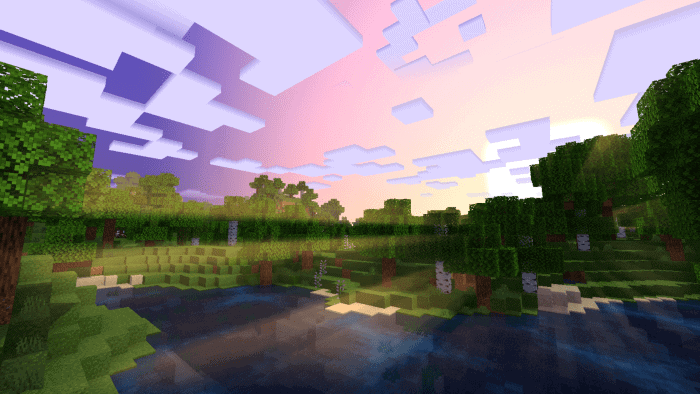 ESTN Shader is a shader pack made to change your gameplay’s look through shader. It will change water noise, plant waves, shader based sun and moon, monochromatic weather, and much more!

This shader is only for mobile and Win10 edition of Minecraft. There will be no Console version of this shader ad it has the Render Dragon Engine, which can’t run any shader packs from the previous engine. For more info, continue reading the description.

This shader also works on Minecraft Education Edition in certain versions. However, the results maybe different compared to other platforms. This shader supports Minecraft Bedrock v1.16.0+. Minecraft versions with the new engine will not be able to apply shaders like this into the game as the new engine doesn’t support shader from old engine. Please check the changelog of the version of Minecraft you’re playing if it has been updated to Render Dragon.

Most of the bugs know in ESTN Shader at the moment are precision related, and some for some reason, not solvable. Most of these issues cam from iOS devices and some from ancient android devices. However these bugs are hard for me to fix, so it might be better to use this shader on mid to high end phones or use a preset that minifies those bugs. For Win10, there is a bug when you mess with the AA (Anti-aliasting) toggle it makes everything black, it seems to only happen if the AA is off.

This shader has been completely overhauled which means I can give it a new license, so this back now uses the GNU GPL License. This means you can share/post this pack as long as there is a copyright notice. Info about license will be found at: https://choosealicense.com/licenses/gpl-3.0/ . Here’s is a simpler version

If you want to make your Minecraft look more beautiful, you can download more shader below: