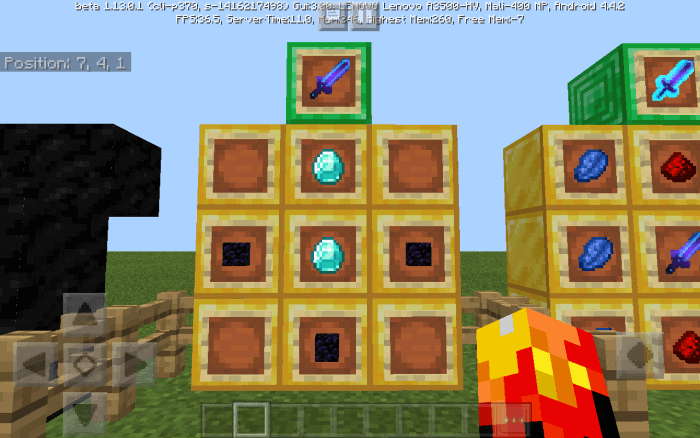 Elemental Swords Addon adds super-powered swords to have more fun in Mine-verse. You can craft them and fight with some powerful bosses.

NOTE: The swords can’t come into your hotbar. You should craft them for seeing and using them or use : “/function swords” , “/function sticks”

This sword is tier-1(strength1). It doesn’t have any special power but it’s the key to other swords.

This sword is tier-1 with super-speed and slow-falling. The knight sword is the key to others.

Tier-1 with super-jump. Use it with an air-sword for don’t getting hurt.

Moving is hard because of heavy weight. But you have strength-8

It has all knight-sword power double. And it used for… the next one

The most powerful sword of this addon with

But it’s so hard to obtain

It’s an upgrade for master sword with:

You can use this sword for exploring under-water. It has the conduit-power and tier-1

Certainly, it’s not a sword, it is a magic-wand. When you’re moving to a block that is air, it changes it to a wool block that you don’t fall. If you jump it happens. It changes lava to obsidian and water to ice, too.

You should craft the asgard-stones. The lightning-stone and lightning-stick. When you get it on your hand, all the mobs in the range of 4 – 14 from you get on lightning_bolt

For now, the crafting is broken. You should get it with commands. Spawn evocation-fang at mobs in the range of 4 – 14

The iron battleaxe has 30 attack damage. It doesn’t have any effects.

It has the power of three swords at once. You can use it for killing some powerful bosses like the new ender-dragon.

A sword made of rainbow stone that can be found from killing a rainbow knight. One of the most powerful swords.

An upgrade for aqua sword with double power and throwing ability.

An upgrade for a galaxy sword with more hearts and strength.

Cool weapon in the place of trident with lightning power when it is thrown.

GETTING ALL THE SWORDS:

A stick that affects everyone from 4 – 14 on poison.

You should craft the empty infinity stone then make the stone and finally craft infinity stone. With its power you are INVINCIBLE.

With that you can get powers to your master dog for fighting with hostile mobs.

Have 4 swords for you to shoot. You have a little strength and speed. The 3rd and 4th level of swords have the power of explosion. Be careful and enjoy it. Hold to shoot.

Pull everyone into earth to dye

One upgrade of legendary knight sword

A new boss that naturally spawn

The knight drops some swords

Now you can find swords in treasure chests

You can find one mob in one biome. Or maybe other worlds.

Now you see like this just wear a pumpkin to your head.

As you can see they were not replaced. They were not completed. They don’t have  any recipes yet, get them with :”/give command (armor:assa/armor:bedrock/armor:iron)”

Check out the knight’s skin pack too.